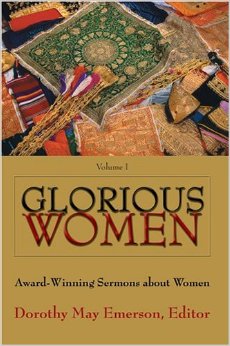 Glorious Women: Award Winning Sermons About Women is a collection of sermons by Unitarian Universalist women which won the MSUU (Ministerial Sisterhood Unitarian Universalist) Award between 1984 and 2004. Edited by Dorothy May Emerson, the sermons are by women and men – predominately women – and entrants to the contest were instructed to address their sermon to the topic of “women and the experience of being a woman.” The award itself was intended to promote preaching on topics having to do with women.

The sermons are historical and contemporary, both scholarly and personal in tone. They reflect on women forebears in Unitarian Universalism as well as on deeply felt experiences in the women’s own lives. All of the contributors offer reflections following their sermons about the historical, personal, and congregational context for which the sermon originally was written.

In addition to the sermons themselves, Dorothy Emerson’s introduction to the volume provides a helpful overview of the work of the MSUU group. She contextualizes their work in the context of the longer history of women Unitarian, Universalist, and UU ministers, stretching back to the nineteenth century. Emerson notes that although women ministers made up as much as 8% of the Universalist ministry at the outset of the twentieth century, those numbers declined dramatically by the Great Depression of the 1930s. Finally, by the 1960s, the consciousness-raising efforts of that decade began to turn the tide towards women’s ordination again. In 1974, there were only 25 ordained UU women, but by 1984, when MSUU began offering its sermon awards, a “tipping point” of 15% had been reached, with 15% of the Unitarian Universalist ministry comprised of women. By 1999, over half of all UU ministers are women, a huge change in just fifteen years.

Harvard Square Library would like to thank Dorothy Emerson and Audrey Vincent, on behalf of the no-longer-extant MSUU organization, for permission to reproduce this hard-to-find volume online. Glorious Women is presented here in its entirety as a single PDF document. Addenda to the text are found at the bottom of this page, below the PDF viewer.

The organization which sponsored the sermon contest, MSUU, no longer exists. Audrey Vincent, one of its presidents, summarizes the fate of MSUU as follows:

“In 2009 leaders of MsUU met a final time at the Salt Lake City UUA General Assembly to formally acknowledge the demise of MsUU. MsUU’s continuing existence appeared to be irrelevant to the next generation of women ministers.  Whether this indicates that women ministers have at last achieved parity with their male colleagues remains for history to determine. An informal group of MsUU members continue to financially support their Unitarian ministerial sisters in Romania. Carolyn Owen Towle’s Tablecloth Project resides on display at the Meadville Lombard Theological School in Chicago.”

page 7:  In the list of MSUU Presidents, Bets Wienecke should have her own line separate from that which starts with Martha Munson.