Cakes for the Queen of Heaven – Introduction

An Exploration of Women’s Power Past, Present, and Future 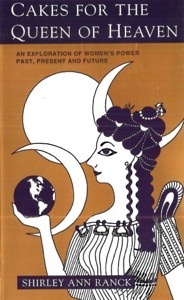 Harvard Square Library is pleased to offer the full-text of Cakes for the Queen of Heaven, by UU minister Rev. Shirley Ann Ranck.  The following text is a companion volume to the UUA’s and Ranck’s historic religious education curriculum of the 1980s, which was published as a response to the Women and Religion Resolution of 1977.  For more information about the curriculum, visit the UUA’s  coverage of an event at the 2006 General Assembly featuring Cakes authors Ranck and Rev. Leslie Westbrook.

Cakes for the Queen of Heaven explores the relationship between women’s religious history and the personal issues that arise in women living in this patriarchal society. Women struggle with issues of body image, troubled mother-daughter relationships, sexual freedom and access to power. We need to know that there was a time when the female body was sacred; that there once was a long-lasting religion in which the chief divine actors were a mother and her daughter; that in very ancient times women had significant power in their societies; that although patriarchal societies have oppressed women for centuries, there have always been strong and talented women. Our female history has been erased and trivialized for too long. In this book we meet ancient goddesses and their stories from around the world, real women in ancient Sumer, in Greece, in Judaism and in Christianity. In Cakes for the Queen of Heaven the past is before us, the women are there, and they help us change our lives.

The Reverend Dr. Shirley Ann Ranck is an ordained Unitarian Universalist minister and the author of the popular feminist thealogy curriculum, Cakes for the Queen of Heaven, newly revised and updated, and the book of the same title. She has served as minister in several Unitarian Universalist congregations including Cincinnati Ohio, Mobile Alabama, San Rafael California, Kennebunk Maine, Olympia Washington, West Vancouver British Columbia, and Flint, Michigan.

Before becoming a minister Dr. Ranck was a licensed psychologist who worked in hospitals, clinics and a county jail for women as well as in private practice. She holds a Master’s degree in religious education from Drew University, an M.A. in clinical psychology from City College of New York, a Ph.D. in urban school psychology from Fordham University, and a Master of Divinity from Starr King School for the Ministry in Berkeley, California. She is the mother of two sons and two daughters, and has five grandchildren, and one great-grandchild.

Continue to the next item in the series, using the navigational tools below, to read the complete text.