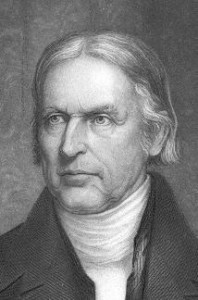 1794 – Hosea Ballou was ordained on this day without advance notice or preparation at the age of 23. Although he had been a respected Universalist preacher for some time, he had never been ordained. One the last day of the Universalist General Convention in Oxford, Massachusetts, Elhanan Winchester, known for his fiery preaching, pressed his Bible against Ballou’s chest at the climax of his sermon, crying out “Brother Ballou, I press to your heart the written Jehovah!” and ordering a church elder, Joab Young, to “charge him.” Read more about Hosea Ballou.