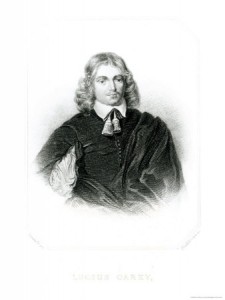 1643 – Lucius Carey, the second Lord Falkland, died. He was a writer of significant learning and one of the first Socinians in England. He was born about 1610 in Burford, Oxfordshire, England. King Charles made him principal secretary of state and privy councilor. Carey fought on the side of the king in the English civil war and was killed in battle before he was 34.