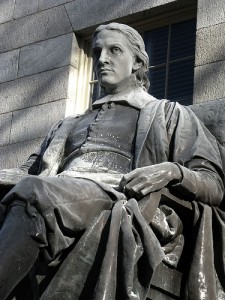 1638 – John Harvard died at the age of 31. He was a congregational minister in Charlestown, Massachusetts, who left numerous books and some money to a college newly mandated by the General Court to be formed in Newtowne, Massachusetts. The school was then renamed in his honor, and the town’s name was changed to Cambridge. Harvard became a dominant training ground for Unitarian ministry. Read more about the early history of Cambridge.