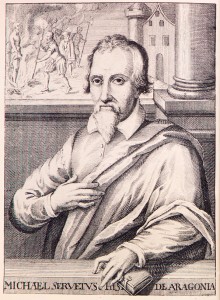 1553 – Michael Servetus was burned at the stake at Champel, near Geneva, Switzerland. At the instigation of John Calvin, he had been sentenced the day before to death for challenging the doctrine of the Trinity and publishing On the Errors of the Trinity. Servetus went to his death with his books chained to his thighs. Servetus was a learned theologian. His death gave rise to cries for tolerance in religion. Read a biography of Earl Morse Wilbur, an historian who wrote prominently about Michael Servetus.