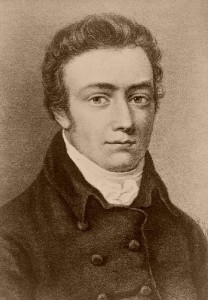 1772 – Samuel Taylor Coleridge was born in Devon, England. Raised partly as a “charity boy” in an institution, he was a minister’s child with an inquisitive mind. In early life, he was a Unitarian and often preached in Unitarian chapels, but he eventually became an Anglican. Coleridge was a gifted poet who was instrumental in the Romantic movement in England and wrote theological and political works as well. Among his most famous poems are “Rime of the Ancient Mariner” and “Kubla Khan.” Samuel Taylor Coleridge had a significant influence on Transcendentalist Ralph Waldo Emerson.