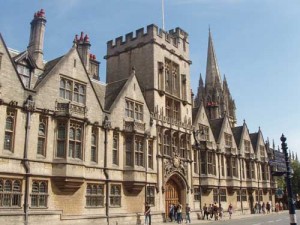 1889 – Manchester College, an academy to train Dissenters from the Church of England for the learned professions, opened in Oxford. Its main function was to train Unitarian ministers, though it had no official connection with the denomination. Now a constituent college of Oxford University, its charter from Queen Elizabeth II requires that the chaplain of the college be Unitarian, and that Unitarian ministerial students be trained at no cost.