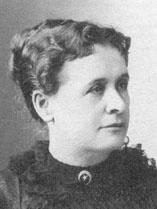 1854 – Eleanor Elizabeth Gordon was born in Hamilton, Illinois. She learned radical Unitarianism from her uncle, William Gordon. She teamed up with Mary Safford, and together they organized the Unitarian church in Hamilton. The pair also served in Humboldt and Sioux City, Iowa. Gordon was ordained in Sioux City in 1889.