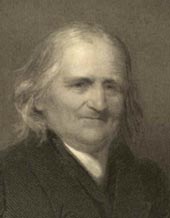 1758 – Noah Worcester was born in Hollis, New Hampshire. Descended from a long line of distinguished clergy, he conducted morning and evening family worship from the age of 12. He had little formal schooling and joined the American revolutionary army in 1775. Desperately poor, Worcester studied theology on his own, was ordained a Unitarian minister, and served several churches. Although he had served in George Washington’s army, he later founded the Massachusetts Peace Society. Read more about Noah Worcester.