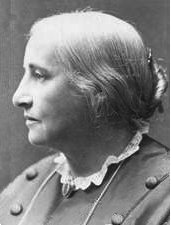 1904 – Ednah Dow Littlehale Cheney, a Unitarian and civil rights activist, died at age 80. She was an activist for women’s rights, abolition, and the education of free slaves. She was a friend of Harriet Tubman, who furthered her interest in educating former slaves. Interested in medical education for women, Cheney was instrumental in founding the New England Hospital for Women and Children. Cheney’s religion was greatly influenced by the Transcendentalists.