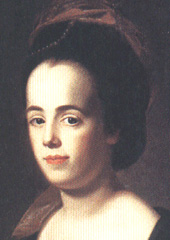 1751 – Judith Sargent Stevens Murray was born in Gloucester, Massachusetts. She married Universalist minister John Murray. A noted essayist, playwright, and poet, she also wrote on women’s issues. When John Murray died in 1815, she finished the autobiography he had begun, The Life of John Murray. A woman of creative genius, she was at the forefront of Universalism until her death on July 6, 1820. Read more about Judith Sargent Stevens Murray.