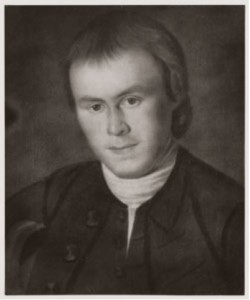 1754 – John Eliot was born in Boston. He succeeded his father as minister of the New North Church in Boston, where he served until his death. He worked with his close friend Jeremy Belknap to found the Massachusetts Historical Society. His Biographical Dictionary (1804) was an important contribution to historical scholarship. He was one of the Harvard overseers who set off the Unitarian Controversy. Read more about John Eliot.