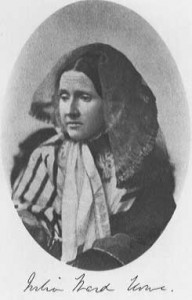 1819 – Julia Ward Howe was born in New York City. She married Samuel Gridley Howe. A poet and lecturer, Howe became famous for writing the poem “Battle Hymn of the Republic,” which was set to the tune of “John Brown’s Body” and became the theme song of the Union Army during the Civil War. Read more about Julia Ward Howe.