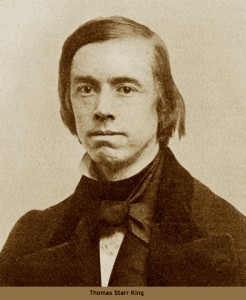 1864 – Thomas Starr King, a Unitarian minister and missionary on the West Coast, died at age 39 of diphtheria. Born the son of a Universalist minister in New York City, King settled as minister of the First Church in San Francisco and made evangelizing tours up and down the West Coast. A strong abolitionist, King also used these trips to lead the fight to keep California in the Union during the Civil War. Read more about Thomas Starr King.