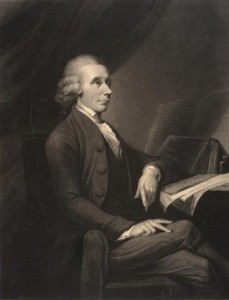 1733 – Joseph Priestley was born in Fieldhead, Yorkshire, England. He wrote the influential History of the Corruptions of Christianity, which Thomas Jefferson credited with his conversion to Unitarianism. However, Priestley is best known for chemistry, in which he made a number of discoveries, including oxygen. Priestley made his inventions available to the public and received no money for any of them. Read more about Joseph Priestley.