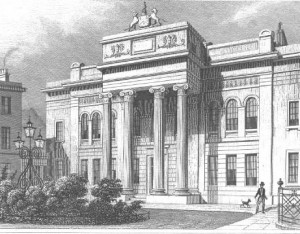 by Tho. H. Shepherd, Engraved by W. Wallis

1719 – Clergy dissenting from the Church of England held an interfaith meeting at Salters’ Hall in Exeter, England, and declared the right of Christian liberty in matters of religious belief. They were the first group of Christian ministers to call for noncreedal religion, and they established a milestone in the path toward freedom of conscience.