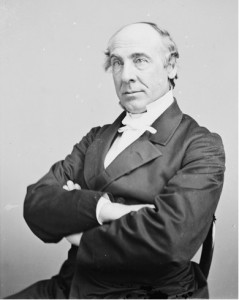 1814 – Henry Whitney Bellows was born in Boston. He became a minister of the First Unitarian Church in New York, which he helped rename All Souls Church of New York. He preached vigorously on public issues. During the Civil War, he united Unitarian and other churchwomen to provide medical and social support for Union troops. After the war, he focused his organizational vision on empowerment of Unitarian congregations. Read more about Henry Whitney Bellows.