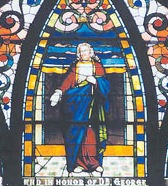 1703 – George de Benneville was born in London, England, to French Huguenot parents. He converted to Universalism early in life and became an itinerant preacher in France, where he was arrested and condemned to death. He was brought before the guillotine but King Louis XV granted him a reprieve at the last moment. After preaching in Germany and Holland and being imprisoned there, de Benneville came to America and became the first preacher of Universalism in the New World. Read more about George de Benneville.