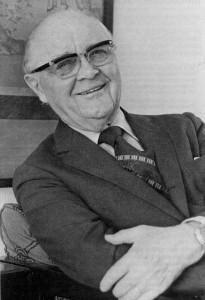 1994 – James Luther Adams, the foremost Unitarian theologian of the modern era, died at the age of 92. Holding professorships at Meadville, Harvard, and Andover Newton, he was a foremost authority on Paul Tillich. He helped organize the Commission of Appraisal, the Unitarian reform movement that led to the election of Frederick May Eliot as president of the American Unitarian Association in 1936. Remembered for his humor, theological acumen, and vast ability to recall the names of books, he joked that he believed in “salvation by bibliography.” Read more about James Luther Adams.