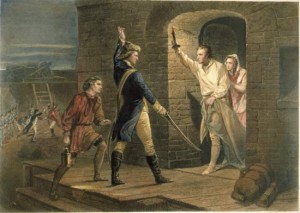 1738 – Ethan Allen was born. His book, Reason: The Only Oracle of Man, strongly influenced the Universalist theology of Hosea Ballou. Allen and his brothers assembled the Green Mountain Boys in what is now Vermont. While leading troops in the American Revolution, he was captured and made a British prisoner of war from 1775-1778.