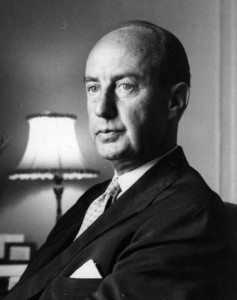 1900 – Adlai Stevenson was born in Los Angeles, California. He was elected governor of Illinois in 1948 and ran twice as the Democratic candidate for U.S. President. John Kennedy appointed him as U.S. ambassador to the United Nations in 1961. Stevenson’s mother was a lifelong Unitarian, and he became member of the Bloomington church in 1952. Read more about Adlai Stevenson.