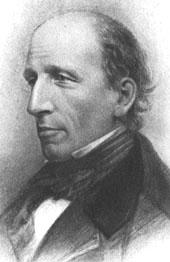 1813 – John Murray Forbes was born in Bordeaux, France. His father was a wealthy merchant, and John learned the trade. He invested in land, iron, steam and railroads and served as the president of the Michigan Central Railroad. Murray became an abolitionist and provided equal pay to freed slaves. He was a member of First Parish (Unitarian) of Milton, Massachusetts, and gave the land for its parsonage. Read more about John Murray Forbes.