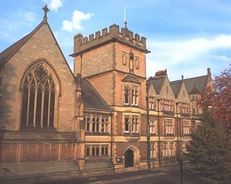 1816 – Russell Lant Carpenter was born in Exeter, England. He was the son of Lant Carpenter, a prominent Unitarian minister. He studied for the ministry at Manchester New College in York, now in Oxford, and went on to serve many churches. His sermons were often on social topics, unusual in that day, and he excoriated England for introducing the opium trade into China. He also addressed the evils of alcohol, slavery, and vivisection.