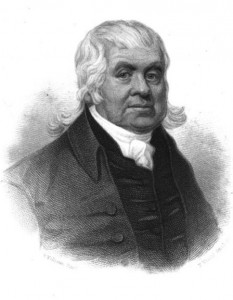 1741 – John Murray was born in Alton, England. The beginning of Universalism in America is often traced back to the grounding of Murray’s boat at Cranberry Inlet, New Jersey, at 1770, near Thomas Potter’s family chapel. Potter believed God sent Murray to preach Universalism there. In 1793, Murray moved to Boston and stayed there as minister until his death. Known as an eloquent preacher, General George Washington appointed Murray as chaplain to the Rhode Island Brigade during the Revolutionary War. Read more about John Murray.