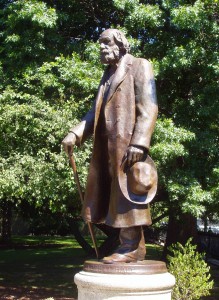 1822 – Edward Everett Hale was born in Boston. He served as a minister at Church of the Unity in Worcester and South Congregational in Boston. A prolific writer, he achieved literary fame when his story “The Man without a Country” appeared in The Atlantic Monthly (1863). In 1903 the U.S. Senate elected him chaplain, a position he held until his death on June 10, 1909. Read more about Edward Everett Hale.