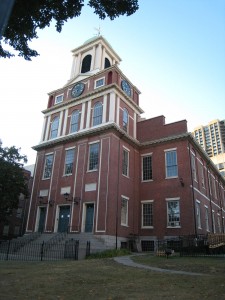 1733 – Simeon Howard was born. He was Jonathan Mayhew’s successor as minister of West Church (Unitarian) in Boston in 1767. West Church was prosperous and known for its liberal views. During the Revolutionary War, the British tore the steeple off the church and housed soldiers inside, and forced Howard out of the city. He moved to Nova Scotia, but returned to West Church after the war.