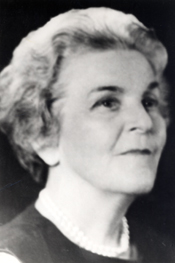 1889 – Emily Taft Douglas was born in Chicago. After graduating from the University of Chicago, she became statewide organizer for the Illinois League of Women Voters. She married Paul Howard Douglas, a senator from Illinois (1948-1967) and was elected to the U.S. House of representatives herself in 1944. Her publications include Margaret Sanger: Pioneer of the Future (1970). Douglas was president of the Unitarian Women’s Alliance, moderator of the American Unitarian Association, and trustee of Meadville/Lombard Theological School. Read more about Emily Taft Douglas.

[Please note that some sources list Douglas’s birthdate as April 10th and others give the 19th; for the purposes of this calendar’s consistency, we will leave her on the 19th. -Director.]