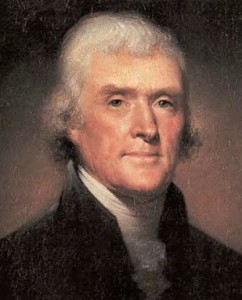 1743 – Thomas Jefferson was born in Shadwell, Virginia. As delegate to the Continental Congress (1775-76), he drafted the Declaration of Independence. Jefferson also wrote the Statue for Religious Freedom of Virginia, where he served as governor. He was the U.S. minister to France, was appointed secretary of state under George Washington, became vice president under John Adams, and served two terms as president of the United States. In retirement he founded the University of Virginia. A convinced Unitarian, he also prepared a Socinian edition of the Bible, known as the Jefferson Bible, which is still in use. Read more about Thomas Jefferson.