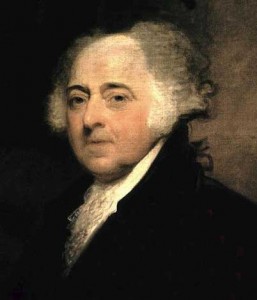 1735 – John Adams was born in Braintree, Massachusetts. He became a prominent lawyer and attacked the Stamp Act in 1765. He helped to draft the Declaration of Independence. Adams also drafted the Massachusetts Constitution. He was vice president under George Washington and succeeded him as president. He was a member of First Parish (Unitarian) in Quincy, Massachusetts, where he is buried with his wife, son, and daughter-in-law, under the care of the National Park Service. Adams died at home on July 4, 1826, only a few hours after the death of Thomas Jefferson.