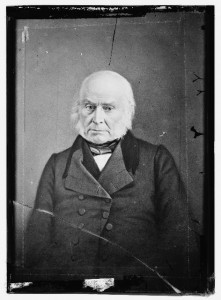 1767 – John Quincy Adams was born in Braintree (now Quincy), Massachusetts, the son of U.S. president John Adams. After graduating from Harvard College, he became a lawyer. His offices included U.S. senator, minister to Russia, chairman of the U.S. Peace Commission to Ghent in England, and U.S. minister to England. He was also secretary of state under President James Monroe, for whom he authored what became known as the Monroe Doctrine, asserting U.S. primacy over other powers interested in the Americas. Elected U.S. President in 1824, he was a founding member of the Unitarian Church in All Souls in Washington, D.C. Read more about John Quincy Adams.