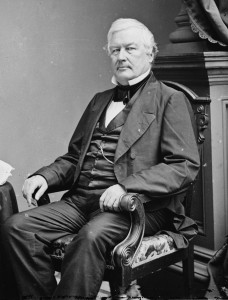 1800 – President Millard Fillmore was born in Locke, New York. He signed a series of bills known as the Compromise of 1850, which admitted California to the Union as a free state, restricted the slave trade in the District of Columbia, and provided for the return of fugitive slaves. He was a member of the Unitarian Church in Buffalo, New York. Read more about Millard Fillmore.