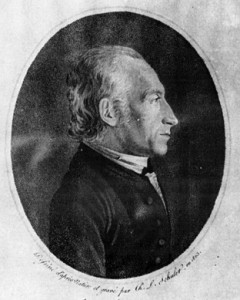 1740 – John Frederick Oberlin was born. A simple village parson in Alsace, France, he was animated by his belief in universal salvation and the triumph of universal good. He ran a village school that was noted for its nurturing spirit, especially toward girls. During the French Revolution, his reputation spared him from anticlerical excess. Oberlin College in Ohio was named in his honor, although its founders never met him.