John Dewey stands as America’s most notable twentieth-century public philosopher, reckoning with the practical problems of modern society as well as the perennial theoretical issues of philosophy. His classic Terry Lectures at Yale embody his distinctive reckoning with religion. 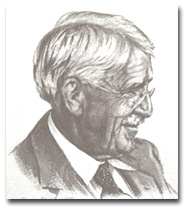 Never before in history has mankind been so much of two minds, so divided into two camps, as it is today. Religions have traditionally been allied with ideas of the supernatural, and often have been based upon explicit beliefs about it. Today there are many who hold that nothing worthy of being called religious is possible apart from the supernatural. Those who hold this belief differ in many respects. They range from those who accept the dogmas and sacraments of the Greek and Roman Catholic church as the only sure means of access to the supernatural to the theist or mild deist. Between them are the many Protestant denominations who think the Scriptures, aided by a pure conscience are adequate avenues to supernatural truth and power. But they agree in one point: the necessity for a Supernatural Being and for an immortality that is beyond the powers of nature.

The opposed group consists of those who think the advance of culture and science has completely discredited the supernatural and with it all religions that were allied with belief in it. But they go beyond this point. The extremists of this group believe that with the elimination of the supernatural not only must historic religions be dismissed but with them everything of a religious nature. When historical knowledge has discredited the claims made for the supernatural character of the persons said to have founded historic religions; when the supernatural inspiration attributed to literatures held sacred has been riddled, and when anthropological and psychological knowledge has disclosed the all-too-human source from which religious beliefs and practices have sprung, everything religious must, they say, also go.

There is one idea held in common by these two opposite groups: identification of the religious with the supernatural. The questions I shall raise concern the ground and the consequences of this identification: its reasons and its value. I develop another conception of the nature of the religious phase of experience, one that separates it from the supernatural and the things that have grown up about it.

Any activity pursued in behalf of an ideal end against obstacles and in spite of threats of personal loss because of conviction of its general and enduring value is religious in quality. The question narrows itself to this: Are the ideals that move us genuinely ideal or are they ideal only in contrast with our present state?

The import of the question extends far. It determines the meaning given to the word “God.” On one score, the word can mean only a particular Being. On the other score, it denotes the unity of all ideal ends arousing us to desire and actions. Does the unification have a claim upon our attitude and conduct because it is already, apart from us, in realized existence, or because of its own inherent meaning and value? Suppose for the moment that the word “God” means the ideal ends that at a given time and place one acknowledges as having authority over his volition and emotion. The values to which one is supremely devoted, as far as these ends, through imagination, take on unity. If we make this supposition, the issue will stand out clearly in contrast with the doctrine of religions that “God” designates some kind of Being having prior and therefore non-ideal existence.

The idea that “God” represents a unification of ideal values that is essentially imaginative in origin when the imagination supervenes in conduct is attended with verbal difficulties owing to our frequent use of the word “imagination” to denote fantasy and doubtful reality. But the reality of ideal ends as ideals is vouched for by their undeniable power in action.

These considerations may be applied to the idea of God, or, to avoid misleading conceptions, to the idea of the divine. The idea is, as I have said, one of ideal possibilities unified through imaginative realization and projection. But this idea of God, or of the divine, is also connected with all the natural forces and conditions—including human associations—that promote the growth of the ideal and that further its realization. We are in the presence neither of ideals completely embodied in existence nor yet of ideals that are mere rootless ideals, fantasies, utopias. For there are forces in nature and society that generate and support the ideals. They are further unified by the action that gives them coherence and solidarity. It is this active relation between ideal and actual to which I would give the name “God.” I would not insist that the name must be given.

A clear and intense conception of a union of ideal ends with actual conditions is capable of arousing steady emotion. It may be fed by every experience, no matter what its material. In a distracted age, the need for such an idea is urgent. It can unify interests and energies now dispersed; it can direct action and generate the heat of emotion and the light of intelligence. Whether one gives the name “God” to this union, operative in thought and action, is a matter for individual decision. But the function of such a working union of the ideal and the actual seems to me to be identical with the force that has in fact been attached to the conception of God in all religions that have a spiritual content; and a clear idea of that function seems to me urgently needed at the present time.

One reason why personally I think it fitting to use the word “God” to denote that uniting of the ideal and actual which has been spoken of, lies in the fact that aggressive atheism seems to me to have something in common with traditional supernaturalism. I do not mean merely that the former is mainly so negative that it fails to give positive direction to thought, though that fact is pertinent. What I have in mind especially is the exclusive preoccupation of both militant atheism and supernaturalism with humanity in isolation. For in spite of supernaturalism’s reference to something beyond nature, it conceived of this earth as the moral center of the universe and of human beings as the apex of the whole scheme of things. It regards the drama of sin and redemption enacted within the isolated and lonely soul as the one thing of ultimate importance. Apart from humanity, nature is held either accursed or negligible. Militant atheism is also affected by lack of natural piety. The ties binding us to nature that poets have always celebrated are passed over lightly. The attitude taken is often that of our living in an indifferent and hostile world and issuing blasts of defiance. A religious attitude, however, needs the sense of our connection, in the way of both dependence and support, with the enveloping world that the imagination feels is a universe. Use of the words “God” or “divine” to convey the union of actual and ideal may protect human beings from a sense of isolation and from consequent despair or defiance. A humanistic religion, if it excludes our relation to nature, is pale and thin, as it is presumptuous, when it takes humanity as an object of worship.

Were the naturalistic foundations and bearings of religion grasped, the religious element in life would emerge from the throes of the crisis in religion. Religion would then be found to have its natural place in every aspect of human experience that is concerned with estimate of possibilities, with emotional stir by possibilities as yet unrealized, and with all action in behalf of their realization. All that is significant in human experience falls within this frame.

The things in civilization we most prize are not of ourselves. They exist by grace of the doings and sufferings of the continuous human community in which we are a link. Ours is the responsibility of conserving, transmitting, rectifying and expanding the heritage of values we received that those who come after us may receive it more solid and secure, more widely accessible and more generously shared than we have received it. Here are all the elements for a religious faith that shall not be confined to sect, class, or race. Such a faith has always been implicitly the common faith of humanity. It remains to make it explicit and militant.