“America’s Real Religion:” The Theology and Social Action of A. Powell Davies

This essay explores the intersection of the life, theology, and social action of A. Powell Davies. To read the complete biography of Davies, click here. 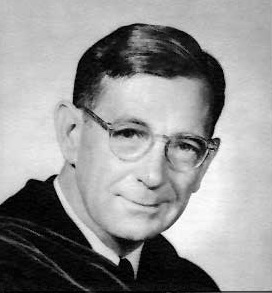 For America’s real religion is the world’s real religion: the only religion that can save us and heal our dissensions. For the faith upon which democracy is based is the victory of truth over superstition, of liberty over servitude, of the universal over the provincial, of love over fear. — A. Powell Davies

As Powell Davies grew up near Liverpool, England, he watched the liners sail off for America, and dreamed of going there. He was raised a nonconformist by Methodist parents from northern Wales. As the First World War ended, he supported a dockworkers strike. The strike leader was elected to Parliament and took Davies to London as his private secretary. Davies was encouraged to go into politics, but instead chose to bring religion into politics. In 1925 he graduated from theological school and was assigned to a Methodist Mission near the docks in East London. Soon there were more than a thousand members. The congregation built a combined church and social center, an idea which he would bring to America. Later he wrote: “In my three years ministry in London, I saw more of death and dying than in all my fifteen in America. I have taken eleven funerals in one week. After seeing dying people all evening, I have done my best to keep awake all night to stave off the nightmares that terrified me.”

December 28, 1927, Davies married Muriel Hannah, the daughter of a Methodist minister. In May 1928 they sailed to begin serving two small Methodist Churches in rural Maine. Within a year Davies was called to a Methodist Church in the city of Portland where he became friends with the Unitarian minister, Vincent Silliman. By the time he reached Portland, Davies had dropped the Apostles Creed from the service. In 1933 he made the break from the Methodist Church and was accepted by the Unitarians. 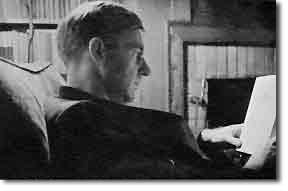 Davies was antiwar. The Britain of his childhood had lost half a generation of young men to World War I. Yet, as Davies began his ministry as a Unitarian in Summit, New Jersey in 1933, Hitler was coming to power in Germany. Davies struggled with the issue of pacifism. In a 1937 sermon he chose his text from the Sermon on the Mount: “Resist not him who is evil: but whoever smiteth thee on the right cheek, turn to him the other also.” (Matt 5:29) Davies explored this text saying, “Of all the disturbing things Jesus said, this is the saying that disturbs me most. He was inviting us to achieve a quality of humanity which scorns revenge.” Week after week, Davies sought a moral response to Hitler’s Germany. Will the meek inherit the earth? Can there be a moral equivalent to war? Why are Jews persecuted in Germany? Davies looked for ways in which to join democratic nations in an alliance for peace. He called the democracies of the world to join in a federal union. As Hitler invaded Czechoslovakia, Davies rejected pacificism. He said, “Face the realities, only the realities. Nothing is so terrible when we face it as when we run away from it.”

As America entered World War II, Davies wrote, “War is a consequence of the kind of world we live in, a world without the fabric of common government. We are in a world of war, and to reach another kind of world we have to win our way in this one. To all intents and purposes, that world is now a neighborhood.”

In 1942 Davies published his first prophetic book, American Destiny. Davies takes his theme from Abraham Lincoln, who said, “The Declaration of Independence gave liberty not alone to the people of this country, but hope to all the world for all future time.” Davies expands this vision of Lincoln to point out America does not mean a territory or a continent. America has always been a conceptual force, “The New World” in contrast to the old. Just as in the ancient world, “Rome” or “Jerusalem” signified more than geography, “The New World” proclaims liberty as a natural inherent right. It adopts a Bill of Rights which rejects totalitarian churches whether Catholic or National.

“Is it a dream?
Nay, but the lack of it the dream,
And, failing it, life‚ lore and wealth a dream,
And all the world a dream.”

-Walt Whitman as quoted by A. Powell Davies

Davies asks, “What is faith?” He answers, “Faith is what we do with our doubts.” Doubt is the mind‚Äôs uncertainty. But we cannot live by doubt. All people need a faith they can believe: a faith that reckons with realities. It knows the ancient evil, brutal and barbarous. But it affirms the great hope of a democratic universal commonwealth, the United Free States of the World. Davies continues this theme in his book, America’s Real Religion. America is not based on the creeds of Christianity but on the faith of Jefferson and Lincoln. For Davies, none of the religions of today can be “The World Religion.” For him, beneath all religions there is “religion.” “Whatever the special emphasis, the local worship, there is a common faith. All speak, in their differing accents, of the living spirit, whom some leave nameless and others call God.”

In 1944 as victory neared in World War II, Davies was called to the capital of America. He became minister to All Souls Unitarian Church in Washington, D.C. He had a passion for being current in his preaching. His sermons were often written on Saturday night. When atomic bombs exploded in Hiroshima and Nagasaki, he immediately saw the implications. He chaired conferences calling for civilian control of this new power. His testimony before Congressional Committees was an important moral force in the establishment of the U.S. Atomic Energy Commission. In November 1946 he had already prepared his sermon when he saw a photograph in the Washington Post. After his sermon he held up the photo of a party at which two U.S. Navy Admirals are cutting a cake shaped like an atomic mushroom cloud. A cake made of tiny angel food puffs. To Davies, the cake was obscene. He said, “How would it seem in Hiroshima, or Nagasaki, to know that Americans make cakes of angel food puffs in the image of that terrible, diabolical thing that brought sudden death to thousands of their friends, and a lingering, loathsome death to thousands of others? It is the most corrupt and rotten thing I have seen in eighteen years of living in this land I love and which to me is the only hope for the human future on this globe.”

Pictures of the cake, with the text of Davies’ wrathful judgment, appeared in newspapers in every continent but Antarctica. Reporters started regularly covering his sermons. As millions of Europeans were short of clothing, he read that American fashion designers were calling for ankle length skirts. He said women should be free of the dictates of fashion. He called the long skirts “immoral,” because they wasted material needed by the suffering world at that time. His pulpit call for “short skirts” made news around the world. He pressed for the U.S. to respond to starvation in Europe. All Souls Church gathered and shipped two tons of food, inspiring the government to ship a million tons more.

In 1948 Davies dedicated a new hospital in Poland made possible by gifts from the Unitarian Service Committee. He was trying to see Jan Masaryk in Czechoslovakia as the Communists took over. Davies returned to America warning of the dangers of Communism. But soon members of his congregation were facing a different danger: the House Un-American Activities Committee and the attacks of Senator Joseph McCarthy. Davies examined the question: “What is Un-American?” He noted it refers not only to a nation, but also to an ideology. In Davies’ view the Un-American Activities Committee was itself Un-American. McCarthy blacklisted movie writers and drove out government workers. Sunday after Sunday, Davies gave moral courage to his congregation of Supreme Court justices, Congressmen, government workers and their families. In a nationally televised debate Davies challenged a McCarthy staff member to name one leading Protestant clergyman who was an espionage agent. He received no answer. Fear of McCarthy caused the State Department to ban the books of Davies from American overseas libraries. Finally, President Eisenhower turned against McCarthy, and the high tide of the American Witchhunt receded.

When Davies started his ministry in Washington, it was a segregated city: no racial mixing in clubs or coffee shops. Davies asked volunteers in the church to check the restaurants in the District and list those that would serve all races. Then he called on his congregation to move beyond “The Shelter of Good Intentions.” He asked them to say, “I will not eat a meal in any restaurant that excludes Negroes.” He asked them to make this known to the management of such places. That Sunday, most of the congregation of over one thousand joined him in making that pledge. The small list of restaurants soon became one hundred and two hundred. And soon segregation in the District of Columbia would be unlawful. 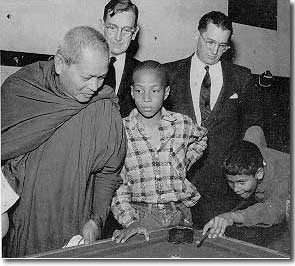 Davies also faced a segregated institution in his own church. During the week the Police Boys Club used the church gym. In 1949 the church board requested the club to take steps toward integration. In 1954 the U.S. Supreme Court outlawed segregation in public schools, and the church insisted that the Boys Club be integrated. In December the Police Boys Club moved out of the church. With the help of the Unitarian Service Committee the church organized an integrated Boys Club. Within a few years girls were included.

For Davies his church was the fixed point from which he could move the world. In rented facilities around Washington, hundreds gathered each Sunday to listen to his sermons by telephone. These gatherings mushroomed into Unitarian Congregations, six, seven, eight and now sixteen. Tapes and records of his sermons were played in monthly gatherings of Unitarians from Kenya to Japan. Collections of his sermons later became models for preachers like Forrest Church at All Souls Church in New York City. Three Bible centered books of Davies became paperback best sellers.

On the 26th of September 1957, A. Powell Davies died of a blood clot. He left his wife of 30 years, Muriel, who took up a ministry of religious education. In addition, he left two daughters, Gwendolyn and Bronwen, as well as his many admirers.