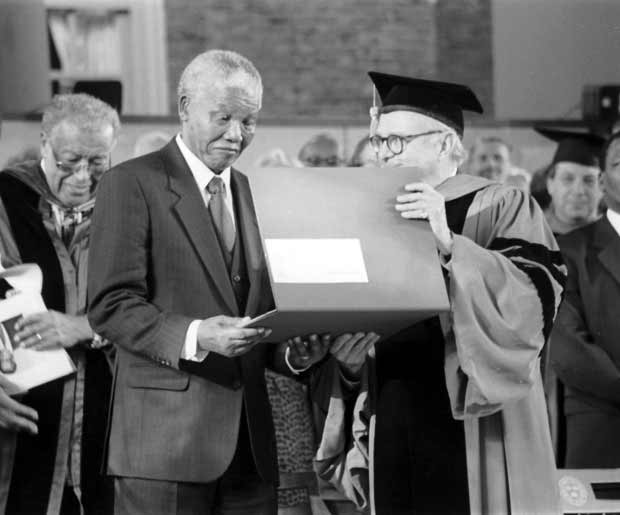 George Washington was awarded his degree in 1776, shortly after driving the British army out of Boston.

The victory prompted many towns and legislatures to present the general with congratulatory awards, and the University got into the act as well when officials voted at a special meeting in Watertown to give Washington an honorary LLD.

The degree was presented at his military camp in Cambridge, written in Latin and signed by every member of the Corporation except John Hancock, who was in Philadelphia at the time. The text was published in local newspapers, along with an English translation.

The honor was the first academic degree Washington received, and also the first honorary degree conferred by Harvard upon a non-graduate.

Churchill’s degree was awarded during World War II. The President and Fellows voted on May 26, 1943 to confer an honorary degree on the head of state whenever he could find time and make his way to Cambridge.

On September 6, Churchill traveled from Washington to Cambridge with his wife and daughter to accept the honor.

In order to preserve Churchill’s safety, his visit was shrouded in secrecy. The Faculty was not informed in advance that Churchill was to receive a degree, summoned instead on the day of the event to “an Academic Meeting on September 6th for the conferring of an honorary degree.”

No public announcement was made for the visit.

The degree ceremony was held in Sanders Theater with about 1,400 faculty members and guests in attendance.

After the ceremony, Churchill delivered a five minute address from the steps of Memorial Church to 6,000 Harvard students associated with the armed services.

Students and Cantabridgians gathered behind the assembled troops on the steps of Widener to hear Churchill speak.

While Harvard traditionally awards honorary degrees during its Commencement ceremonies, it rarely makes special arrangements for the presentation of an honorary degree during the academic year.

Very few other out-of-season degree awards have been given Hunt said. He recalled that sixty-eight were given in 1936 and four were given by the Medical School in 1982 in honor of special University events.