Students Speak Out: A Conflicted Relationship 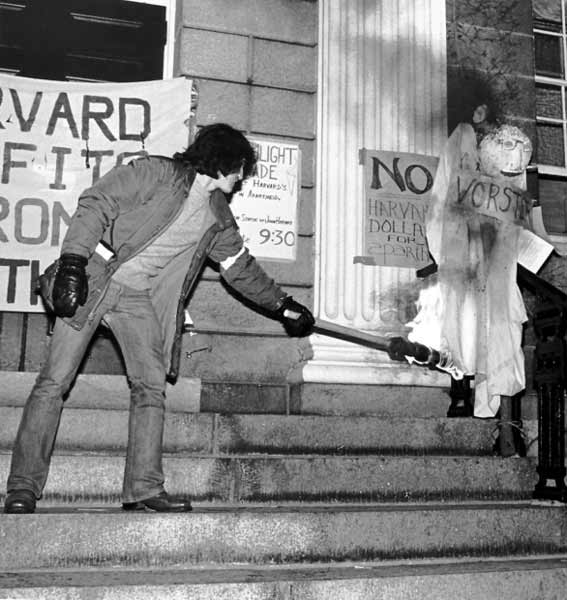 At a speech at the Institute of Politics (IOP) in 1985, South African Bishop and Nobel Peace Prize Laureate Desmond Tutu issued a plea to the richest University on earth.

As the University convenes a rare out-of-season honorary degree ceremony to honor Nelson Mandela, South Africa’s first black president and first president since the end of the apartheid system, Tutu’s wish has been fulfilled though it took some prodding.

Throughout the ‘80s, Harvard professors for the most part avoided involvement with South Africa in protest of apartheid, and then president Derek C. Bok was a vocal supporter of work by the U.S. to prompt reform in South Africa.

But the University was slow to pull its own investments out of companies doing business in South Africa, insisting that through its proxy votes, it could more effectively fight apartheid than by purging stocks from its portfolio. But after a decade of protests, Harvard did adopt a policy of selective divestment, and by the end of the ‘80s was almost completely out of South Africa.

Now, after the abolition of apartheid in 1993, Harvard is reinvesting in South Africa, and Harvard’s professors are turning their interest toward the country as well. 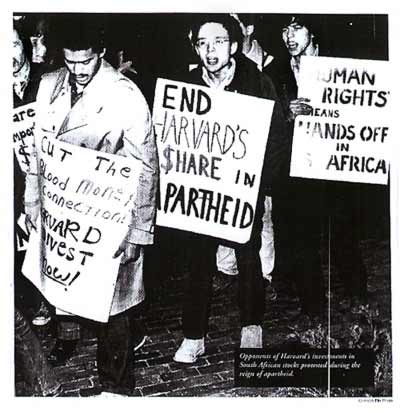 In spring 1972, three years after a student takeover of University Hall jolted Harvard into the age of campus unrest, a group of black students from Harvard-Radcliffe Afro and the Pan-African Liberation Committee took over Massachusetts Hall, headquarters of the central administration. Demanding that the University sell its investments with Gulf Oil Corp., which allegedly aided the Portuguese government fighting rebels in Angola, the students stayed in the building for six days before finally leaving.

The Mass. Hall takeover marked the opening skirmish in the fight for divestment. In 1973, the Advisory Committee on Shareholder Responsibility (ACSR) was created to advise the Corporation on ethical issues, partly in response to the takeover.

Following a mid-decade lull, the divestment movement quickened in 1977 after protests at Stanford University spread to other campuses.

The next spring, in one of the largest protests at Harvard during the 70s, 1,500 students crowded into Harvard Yard on April 24, blocking President Bok from his Massachusetts Hall offices after a Corporation meeting decided against divestment.

Justifying its decision, the Corporation released a statement explaining that “We oppose divestment under normal circumstances not merely—or even primarily—because it costs the University money, but because it is an ineffective means of pursuing ethical ends.”

It also forbade investing in banks that made loans to the South African government and companies that provided “significant quantities of an important good or service used in the direct enforcement of apartheid.” The policy also promised a divestment of stock in companies that refused to disclose the extent of their operations in South Africa.

But these moves did not appease student activists, who called for complete divestment. Under the leadership of the Southern Africa Solidarity Committee (SASC)—a group formed in the fall of 1977—divestment moved to the forefront of student activists’ agenda in the mid-eighties.

“Every Word Heard is Divestment,” read a headline in an April 1985 issue of The Crimson.

The next year—after Tutu, a 1978 honorary degree recipient, spoke at the Institute of Politics—the divestment movement reached its peak.

That spring, students built a shantytown in front of University Hall, which stayed up for several months, through Commencement. Pro-divestment alumni succeeded in electing Gay W. Seidman ‘78—a former Crimson president and a supporter of divestment—to the Board of Overseers.

And at the University’s 350th anniversary celebration later that summer, protestors forced the cancellation of the gala anniversary dinner in what The Crimson called “the protest of the decade.”

But even as Harvard was torn over its financial ties to South Africa, academically the University had little to do with South Africa.

“During the time when South Africa was under the apartheid regime, American universities in general tended to shun the area,” said Robert H. Bates, Eaton professor of the science of government and acting chair of the Committee on African Studies.

While some work in South Africa did occur in the 1980s and earlier, it tended to focus on the problems of apartheid and on strategies for the country’s future, said Robert I. Rotberg, development associate at the Harvard Institute for International Development (HIID).

“Research continued, but it was certainly anti-apartheid oriented,” he said. 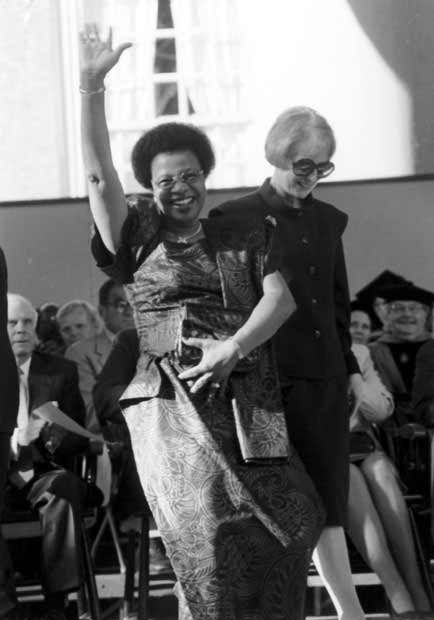 As the apartheid system began to unravel in the early 1990s, students activists—and the Advisory Committee on Shareholder Responsibility (ACSR)—began to shift their attention away from Harvard’s investments in South Africa.

In 1993, Harvard’s restrictions on investing in South Africa were lifted, and the University began to reinvest in South Africa. “We have more deeper economic interests in the economic development of the country and the emerging markets there,” said University Marshal Richard M. Hunt.

Jack R. Meyer, president of the Harvard Management Company, which manages the University’s $12.8 billion endowment, says that although the University’s current South African investment is relatively low, the market is promising. “There is certainly potential [in South Africa],” he said.

The University’s academic ties with South Africa have been strengthened as well.

Although HIID, which coordinates development assistance to Africa and other underdeveloped regions, has no specific programs in South Africa, its administrators are in close contact with government officials in South Africa, Rotberg said: “We’re in touch with South Africans all the time,” he said.

Even scientific research has increased, said Alfred W. Compton, Fisher professor of natural history and a native of South Africa. “There may be a greater willingness [now] on the side of American scientists to visit South Africa,” he said.

Hunt visited South Africa earlier this year. While his visit was “personal” in nature, he visited several Harvard affiliated and honorary degree recipients in the country.

Hunt said that his visit helped him gain a new appreciation for South Africa’s accomplishments.

“The feeling of many Faculty members is that this is a country that has gone through extreme trials and tribulations and has emerged from apartheid in a bloodless way,” he said.