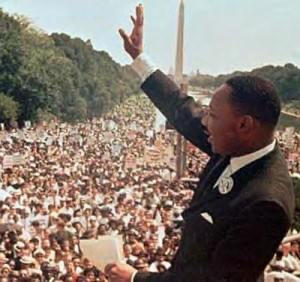 Martin Luther King, Jr.’s national career began when one woman, Mrs. Rosa Parks, firmly said, “No!” to the white driver of a Cleveland Avenue bus, who ordered her to stand farther back in the Negro section so a white man could have her seat. That day and place-December 1, 1955, Montgomery, Alabama-are now permanently etched in the epic of America. A single person’s protest against being treated as less than a human being with equal rights marked the opening of a new era of social relations in the New World. One woman of courage unknowingly launched a revolution, for the arrest of Rosa Parks marked the start of the Movement—the new American revolt for equality for all citizens. The Moses of this civil rights crusade is the Rev. Martin Luther King, Jr.

Dr. King gave such significant leadership to the nonviolent struggle against segregation and for the enhancement of the human family that he was awarded the international Nobel Peace Prize in 1964. His life affirms that relevant religion is protest, protest against the powers that destroy the individual in American democracy. His sacred impatience was dramatically expressed to millions upon millions of people when Dr. King declared to a quarter of a million Americans assembled at the Lincoln Memorial in the historic 1963 March on Washington:

I have a dream that my little children will one day live in a nation where they will not be judged by the color of their skin but by the content of their character.

I have a dream that we will be free one day.

This will be the day when all of God’s children will be able to sing with new meaning, “My country, ’tis of thee, sweet land of liberty, of thee I sing: Land where my fathers died, land of the pilgrim’s pride, From every mountain side, let freedom ring.”

After prophetic action not only for racial equality but also for freedom for human fulfillment in fighting against the degrading slums in Chicago, Dr. King vigorously opposed what he viewed as our nation’s unjust Asian war in Vietnam.

Then, the Rev. Martin Luther King, like President Abraham Lincoln before him, was silenced by the bullet of an assassin.

Now the United States of America officially celebrates his birth and his ongoing life as a national day of remembrance.