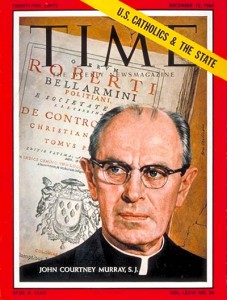 The first book of John Courtney Murray was We Hold These Truths: Catholic Reflections on the American Proposition. When it was published in 1960, Time magazine ran a feature article and also put Murray’s picture on the cover as “unquestionably the intellectual bellwether of this new Catholic and American frontier” of building the city. Contrary to the expectation of some liberals, the life of this Jesuit priest declares: religion is freedom. Indeed, Dr. Murray was awarded the Thomas Jefferson Award for Conspicuous Service in the Cause of Religious Liberty in 1965. On this occasion, this relevant reverend who is acknowledged as the chief architect of the historic Vatican Declaration on Religious Freedom, said the purpose of human living together is that we may be released from slaveries and emerge into the freedom that is the human birthright.

After the famous Day of Wrath—November 19, 1964—when the Vatican Council postponed deciding on religious freedom, Murray declared: “The failure is the more lamentable because religious freedom is not the most important issue before the Council, nor the most difficult, except insofar as it raises the issue of development of doctrine, which is the issue underlying all issues at the Council.” When the Declaration on Religious Freedom was finally affirmed at Vatican Council II, John Courtney Murray wrote in America that: “Its achievement was to bring the Church, at long last, abreast of the consciousness of civilized mankind, which had already accepted religious freedom as a principle and as a legal institution.”