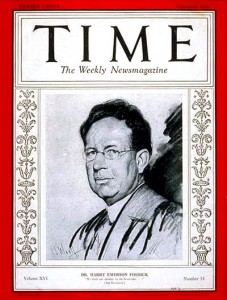 When he was seven, Harry’s mother collapsed. Caring for three children amidst deepening debt were factors in her first nervous breakdown. Later on she sought to comfort her son amidst his dread that he had committed an unpardonable sin, which would thrust him into the everlasting hell described by their family pastor’s fire and brimstone sermons.

When in college, Harry learned that stories in the Bible were not true, so he refused to attend church or prayer meetings. This rebel against bibliolatry became the life of school parties, astonishing everyone when he decided at graduation to prepare for the ministry. While then studying religion in New York City at Union Theological Seminary and philosophy at Columbia University, his field work included as many as nine worship services per Sunday in the Bowery slums. Harry became too ill to sleep and almost cut his throat with a razor. When well enough to return to school, he felt strengthened by a Power greater than himself.

When then serving as a pastor, he grew skilled at counseling people in despair. He discovered a method of focusing each sermon on some problem experienced in contemporary life. When he preached a sermon, “Shall the Fundamentalists Win?,” Hell broke out concerning the virgin birth, the infallible book, and the Second Coming of Jesus. Although his congregation supported him, the Presbyterian fundamentalists called for a heresy trial.

The final outcome was an invitation for him to help to create what is now the Riverside Church of New York. Its distinguished works of art celebrate leaders of humanity: not only Christ but Florence Nightingale, Charles Darwin, Albert Einstein, Mary Baker Eddy, Abraham Lincoln, Moses, Martin Luther King, Confucius, Mohammed, Buddha, and Albert Schweitzer.

When Riverside Church was dedicated in February 1931, the congregation exultantly sang a new hymn, now heard around the world:

God of grace and God of glory,
On thy people pour thy power;
Crown thine ancient church’s story;
Bring her bud to glorious flow’r.
Grant us wisdom,
Grant us courage,
For the facing of this hour.

Cure thy children’s warring madness;
Bend our pride to thy control;
Shame our wanton, selfish gladness,
Rich in things and poor in soul.
Grant us wisdom,
Grant us Courage,
Lest we miss thy kingdom’s goal.

Harry Emerson Fosdick: God of Grace and God of Glory