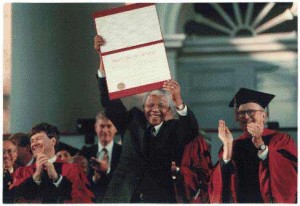 At a unique special convocation during the American Revolution, in 1776, Harvard College conferred on George Washington an honorary doctor’s degree .

At a special convocation during World War II, in 1942, Harvard University conferred on Winston Churchill, the Prime Minister of Great Britain, the honorary degree of Doctor of Laws.

At another special convocation in the twentieth century, Harvard conferred the honorary Doctor of Laws degree on Nelson Mandela, the President of the Union of South Africa to be—the first African honored at an out of season special convocation.

The president of the university succinctly declared in the citation why this American center of higher education singled out the President of South Africa:

Conscience of a People,

Soul of a Nation,

He has brought forth freedom from the crucible of oppression,

And has inspired by his courageous example

The better angels of our nature.

That public act of celebration, at which more than 25,000 people joyfully gathered together, is the durable visual theme of the Cambidge Forum national public television presentation of Harvard Honors Nelson Mandela.

Here now in this book is the first publication of the full text of the distinguished addresses delivered on that occasion. Moreover, here you will see a panorama of photographs selected from the forty rolls of film shot by the Harvard University Office of News and Public Affairs.

In addition you will find not only the reflections of an observer who was present at the convocation but four articles written by Harvard College students giving thoughtful critical and constructive historical perspectives concerning Harvard’s long conflicted struggle against apartheid. These selections were included in a Special Supplement of The Harvard Crimson issued the very day the honorary degree was awarded. Moreover, here you will find photos from the Crimson which visually dramatize the decades of disagreement within and without the university community before the issue was resolved.

My own role as a participant observer came partly through my having been for many years a member of the United Ministry at Harvard and Radcliffe, an independent association of Chaplains to the University.