One subject that did not seem to fit into the plan of this unit, but might appeal to the children, is that of hands that do not act directly “as hands.” Two instances of this would be: (I ) mechanical hands, especially as they are used in situations too dangerous for real hands to serve, and (2) the hands of the blind which in a certain sense serve as “their eyes.”

Begin the session by asking the children if they can think of instances where hands are used as substitutes for something else. They will probably think of something similar, at least, to the use of the hands by the blind, but they may not think of the mechanical hands at all.

Mechanical hands. The intricate detail of the mechanical hand is actually, of course, no more complex than the structure of our own hands. The picture of a mechanical hand on the opposite page should arouse the children’s interest. First, let them discuss the possible uses of this hand, then read this description which goes with the picture. Be sure to clarify points that are difficult to grasp. 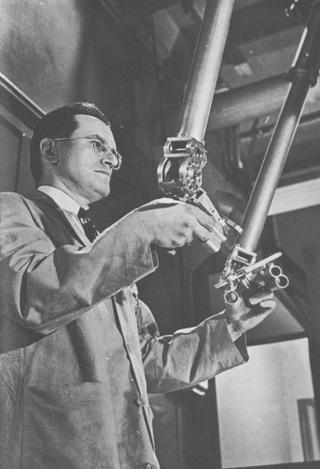 Close up of Associate Metallurgist William F. Murphy as he works the “master handles” that direct the “slave hands” inside the cave. The manipulator can imitate the seven human motions employed in grasping, lifting, moving and turning objects.
by Ewing Galloway

AEC’s Argonne National Laboratory, Lamont, Illinois, is charged with development and fabrication of reactor components. This involves testing and analysis of dangerous radioactive and toxic materials. Therefore the Remote Control Engineering Division and the Metallurgical Division have cooperated to design, build and use a special re mote-control-device — the Master-Slave Manipulator. Argonne National Laboratory scientists are able to perform by remote control virtually any operation which human hands can do and yet be protected from harmful radiation by intervening three-foot shielding walls of concrete and glass. The Argonne manipulator consists of two master handles (outside the shielded “cave”) and two mechanical hands (inside the shielded “cave”) “slaved” to the master handles, displaced from them by about six to eight feet, but moving in exact synchronization with them.

Discuss with the group the dangers of radiation and the courage of men who work in this field. See if they are aware of the peacetime uses of atomic energy as well as its wartime uses, and encourage them to discuss these. Point out the grave responsibilities involved in working with these materials, if they do not think of this themselves, and help them discuss the issues. Children, even in primary grades, are familiar with these concepts from television. See if they can figure out the “seven human motions” referred to in the description of the picture. If they can not do this by visualization, let one child grasp, another lift, a third move and a fourth turn an object while the others observe. This will also serve to remind them of the complexity of the human hand, which they have already studied. Make a chart of these seven basic motions.

Hands that serve as eyes. Material relating to hands as eyes is already available in other books of the Beacon Series, but it fits so well into this unit that this would be a good place to use the materials. Since neither of the books in which the material appears is intended for anything except supplementary use, you would not be interfering with course content.