In France and Spain within the last hundred years, a great many caves have been discovered where there are paintings that have been preserved for more than ten thousand years. These were done by primitive man during the last great ice age. They are the oldest known paintings in the world, yet many say that some of them are equal to any paintings being done today in artistic value. 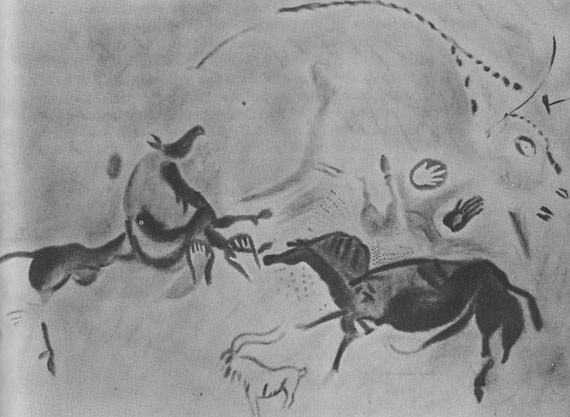 Scientists who have studied these paintings in the caves of France and Spain say that some of the oldest paintings in the caves are those that are human hands. Many of these are stenciled hands, which seem to have been made by holding the hand against the wall of the cave and then blowing paint over it. It is thought that the paint was blown through hollow bones, since many of these with paint in them have been found in the same caves.

One strange thing about the caves is that they are very hard to get into (most of them seem to have had only the narrowest of openings, and there is one where you have to swim or row across an underground stream to get to the paintings), and most of the paintings are in the darkest, most difficult part of the cave to reach. From these facts, we can be quite sure that they were not “art galleries”; in other words, the, paintings were not put there just to be looked at. We think that the paintings were a part of their religious and magical practices. A few of the caves even have foot prints dried into the floor of the cave that show us that these ancient people danced in them.

Not all of the paintings were of hands; most of them were of the kind of animals these people hunted in order to have food to eat. In the caves, many of the painted animals have spears in their sides. But here and there the hands can be found.

This picture shows the hands, and also some of the other paintings in one of these caves.

The hands in this picture are all whole hands. But very often in these caves you will find stenciled hands with one finger, or more than one finger, missing. Most archaeologists think that these hands with fingers missing were a sign of sacrifice. Perhaps, they tell us, the owner of the hand was grateful for some great good fortune in the hunt (such as having been saved from a terrible beast) and offered a finger in thankfulness. Perhaps, some of the archaeologists tell us, the missing finger was sacrificed as something of great value, in return for which the owner would be rewarded in the hunt to come.

We shall never know exactly what the painted hands in these ancient caves mean. But we do know that they were related to the religion (and the forms of magic which it included) of these ice age hunters. Even ten to thirty thousand years ago men had come to realize the great worth of the hand and to use it in their religious ceremonies.

There are also famous paintings of recent years where the hands are very important. Some show hands in the attitude of prayer. This position of the hands is still used in some churches today. There are those who feel that if we take a certain position — on our knees, with hands clasped, or with heads bowed — we are better able to feel ready for prayer. There are others who stand straight, with head facing upward and arms outstretched. And others who lie flat on the ground, their hands before them, facing some special direction. But almost always the hands are a part of this attitude of prayer.

More recently there have been many who felt that it is what hands do that really expresses the spirit of religion. Sometimes this belief that the work of hands is the work of religion is called “the social gospel.” 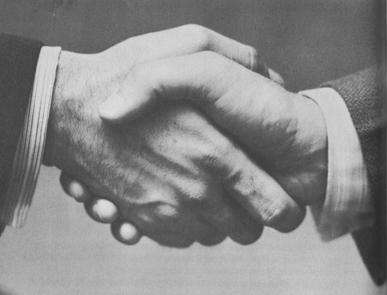 The hands clasped together are also used as a religious symbol, as they are also a sign of friendship when you shake hands with a friend. Many organizations have a special secret handclasp which lets others know that you and he belong to the same group. (If any of you are scouts, you know the handclasp scouts use.) The hand used in this way is considered to be a symbol, or sign, of brotherhood. It is a sign which reminds us that all men are brothers. This is an important part of many religions today and is something which we often talk about in our own church.

So it is that the hand, which can do so many things for others and through which so much is done for each of you, can remind us of certain things our churches teach: prayer through which we strive to realize the best; service through which we work to share what we have with those who need the things we share; and brotherhood by which we say that all men everywhere are a part of the human family. All men are brothers, to serve each other, and in part to do this by using that wonderful part of our bodies — the hand.

Things to Do at Home