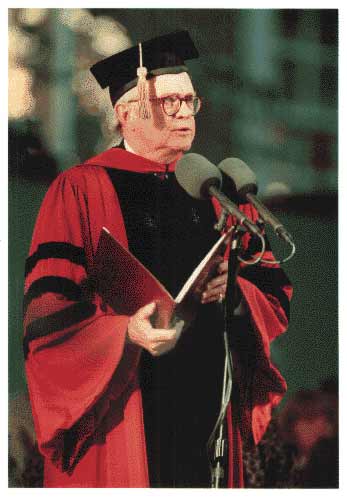 It is now my privilege to present our honored guest. After my presentation, Harvard President Neil Rudenstine, by virtue of the authority delegated to him by the University’s Governing Boards, will confer the honorary degree of Doctor of Laws.

Our guest was born fourscore years ago, in the village of Qunu in South Africa’s Eastern Cape. He received his bachelor’s degree at the University College at Fort Hare, after completing the requirements by correspondence with the University of South Africa. He went on to the study law at the University of Witwatersrand. In 1944, he helped found the Youth League of the African National Congress, and in 1952 he was named deputy president of the ANC. His continuing struggle against discriminatory government policies led to a five year trial for treason beginning in 1956. After banning of the ANC in 1960, and his acquittal of treason charges in 1961, he went underground to mount new strategies in the battle for racial justice.

In 1962, he traveled to other parts of Africa and to England, and on his return he was arrested for leaving the country illegally and for incitement to strike. He was convicted and sentenced to five years’ imprisonment; then, while serving his sentence, he was charged with sabotage, and sentenced to life in prison. He helped transform Robben Island, the principal site of his captivity, into a center of learning for his imprisoned countrymen. There he remained a resolute and inspirational exemplar of the historic struggle against apartheid.

He was released from prison in February 1990, after more than 27 years. He became president of the African National Congress in 1991, and for his leadership in bringing South Africa toward democracy, he was named a co-recipient of the Nobel Prize for Peace in 1993. In May 1994, he was inaugurated as President of South Africa, a role in which he has guided one of the most dramatic transformations undergone by any society in modern times.

President Rudenstine, I am proud to present to you, for the honorary degree of Doctor of Laws, His Excellency President Nelson Mandela.