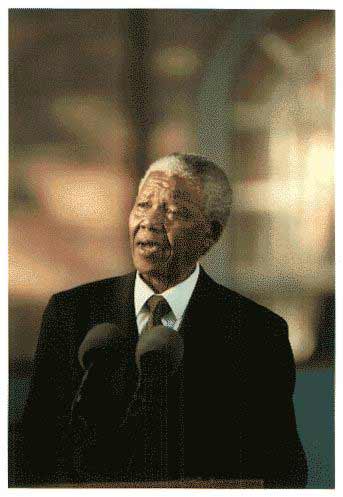 President of the Union of South Africa

When I was in prison, a young lady who is now the principal of a leading university in South Africa, came to see me. She did not beat about the bush. She said, “If my father were still alive, he would have been 70. You are 70, and I came here to see how a man of 70 looks like.”

Now I am 80, and I am very encouraged to see so many people who have turned out but I am not so sure whether many of you have not come here to see how a man of 80 looks like. I keep asking my wife and my colleagues who accompany me on this mission to excuse me for telling the same stories, but you will see how appropriate it is for me to repeat the story. That is, when I phoned some place in my country, and a lady answered the telephone, I then asked, “To whom am I speaking?”

She said, “You’re speaking to me.”
I said, “Well, lady, I know I am speaking to you, but what is your name?”
She said, “Who are you to ask for my name, what’s your name?”
I said, “Well, lady, as soon as you tell me your name, I’ll tell you mine.”
But as we argued as to who should tell his or her name, she became very cross, and she said, “You seem to be a backward person. Have you passed your matric?”
Now, a matric in our country is a university entrance examination, and I said, “Well, lady, you must be very careful because if the qualification to speak to you is the possession of a matric certificate, I might work hard and pass my matric and be in the same class that you are.”
That was treason.
She said, “You will never be in my class,” and banged the telephone.

How I wish that she were here today. She would discover that I have achieved more than pass my matric.

Ladies and gentlemen: This may very well be our last official visit to the United States before retiring from office next year. There could not have been a more moving start to the visit than one which included being honored in this way by one of the great educational institutions of this nation and of the world.

I know that through this award you are not so much recognizing any individual achievement but rather are paying tribute to the struggles and achievements of the South African people as a whole. I humbly accept the award in that spirit, while at the same time wishing you to know that we are not unaware of, nor unmoved by, the great compliment you pay us by conferring this degree at a specially convened Convocation.

To join George Washington and Winston Churchill as other recipients of such an award conferred at a specially convened Convocation is not only a singular honor. It also holds great symbolic significance: to the mind and to the future memory of this great American institution, the name of an African is now added to those two illustrious leaders of the Western world.

I have said before that one of the striking features of modern times is the emergence of men and women and indeed of institutions that have chosen the world as the theater of their operation, as the platform from which to ventilate their thinking and their ideas. Few people will deny that the University of Harvard is one of those institutions that have chosen the entire world in order to bring strength and hope to those who otherwise would have had no future at all, and I want to congratulate this university for the sterling effort it has made in order to ensure that those who have been denied opportunities for decades can now share them. 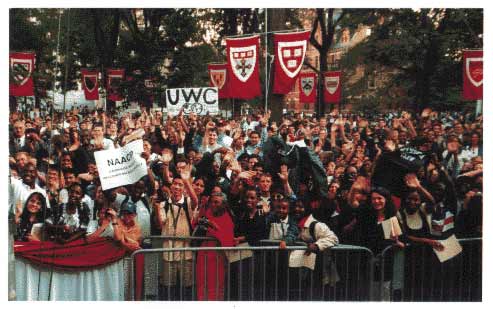 If in these latter years of a life lived in pursuit of equality, we can at last look upon our own country as one in which citizens, regardless of race, gender, or creed, share equal political rights and opportunities for development, we do so with great gratitude towards the millions upon millions all around the world who materially and morally supported our struggle for freedom and justice.

Together with those freedom—and justice—loving citizens of the world, we do at the same time, however, note that at the end of this century—a century which humanity entered with such high hopes for progress—the world is still beset by great disparities between the rich and poor, both within countries and between different parts of the world.

If in individual life we all may reach that part of the long walk where the opportunity is granted to retire to some rest and tranquillity, for humanity the walk to freedom and equality seems, alas, still to be a long one ahead.

This august institution gains its standing and reputation also from the manner in which it has conducted, and continues to conduct, itself as an international presence. Wherever men and women of learning and thought gather, its name and work are known. It embodies that spirit of universality which marks a great university. To join the ranks of its alumni is to be reminded of the oneness of our global world.

The greatest single challenge facing our globalized world is to combat and eradicate its disparities. While in all parts of the world progress is being made in entrenching democratic forms of governance, we constantly need to remind ourselves that the freedoms which democracy brings will remain empty shells if they are not accompanied by real and tangible improvements in the material lives of the millions of ordinary citizens of those countries. Where men and women and children go burdened with hunger, suffering from preventable diseases, languishing in ignorance and illiteracy, or finding themselves bereft of decent shelter, talk of democracy and freedom that does not recognize these material aspects can ring hollow and erode confidence exactly in those values we seek to promote. Hence our universal obligation towards the building of a world in which there shall be greater equality amongst nations and amongst citizens of nations.

The disparity between the developed and developing world, between North and South, reflects itself also in the sphere of educational and intellectual resources. When in Africa we speak and dream of, and work for, a rebirth of that continent as a full participant in the affairs of the world in the next century, we are deeply conscious of how dependent that is on the mobilization and strengthening of the continent’s resources of learning.

The current world financial crisis also starkly reminds us that many of the concepts that guided our sense of how the world and its affairs are best ordered have suddenly been shown to be wanting. They are seen to have hidden real structural defects in the world economic system. The precepts of the economic theorists who could so confidently prescribe to all, now appear to have drawn much of their apparent intellectual validation from having been unchallenged by the day-to-day operations of a system that operated in the interests of the powerfu and not the poorest of the poor.

Not only does this crisis call for fundamental rethinking and reconceptualization on the part of the theorists of the North. It more particularly and urgently emphasizes the need for thinkers and intellectuals of the developing world to sharpen their skills and analysis, and for a genuine partnership between those of the North and the South in helping shape a world order that answers to the shared and common needs of all the peoples and not just the rich.

This university already has had a long partnership of learning and teaching with the South African people. There are many names that one could mention of persons now holding office in government or in institutions of civil society who spent time at Harvard or benefited from programs conducted jointly with this institution. For that, our fledgling democracy faced with enormous tasks of reconstruction and development owes your institution a great debt of gratitude. As South Africans play their role in helping to conceptualize and give content to the African Renaissance, we continue to draw upon the intellectual skills nurtured and honed here.

The United States of America and democratic South Africa have in the course of these last four years built a relationship of mutual respect and cooperation, each country respecting the sovereignty of the other while cooperating as partners. As part of this relationship, the scholars who had the benefit of studying here, returned better equipped to deal with the local challenges and problems as Africans.

It is, therefore, a source of great encouragement and inspiration for us to learn about the “Emerging Africa” research project housed in the newly created Center for International Development at Harvard. Its objective of undertaking an appraisal of Africa’s economic, social and political history, as well as the problems facing the continent, is timely and to be greatly welcomed. That it will be doing this in collaboration with African research institutions and scholars will serve to strengthen and build African intellectual capacity to take charge of its reconstruction and regeneration. I am confident that it will also strengthen and build your own understanding of African reality and your capacity to analyze that reality as part of our shared world. Mister President, we accept this great honor bestowed upon us today as a symbol of how South Africa and the United States, Africa and the West, the developing and the developed world, are reaching out and joining hands as partners in building a world order that equally benefits all nations and people of the world.

For three hundred years this great institution has served its nation with distinction. We enter the new millennium in the hope that the rich fruits of learning, science and technological progress will be in this coming century truly shared by all in this global village in which we live.

We are confident that this institution, of which we are now a proud member, will play a leading role in achieving that.

I said, “Let her come in.”
They said, “Sorry to say, Mr. President, she’s very chicken.”
I said, “Precisely for that reason, let her come in.”
She came in, and indeed she was a great lady. She did not knock. She did not greet. She simply said, “How old are you?”
I said, “Well, I can’t remember, but I was born long, long ago.”
She said, “Two years ago?”
“No,” I said, “longer than that.”
Then she suddenly switched subjects and said, “Why did you go to jail?”
“I didn’t go to jail because I liked it. Some people sent me there.”
“Who?”
“People who don’t like me.”
“How long did you stay there?”
“Well,” I said again, “I can’t remember, but it was a very, very long time.”
Then she said very calmly and confidently, “You are a stupid old man, aren’t you?”

Well, ladies and gentlemen, if you think like that lady that the address that I’ve delivered here, makes me really a stupid man, please be a little more diplomatic than that young lady. Thank you.