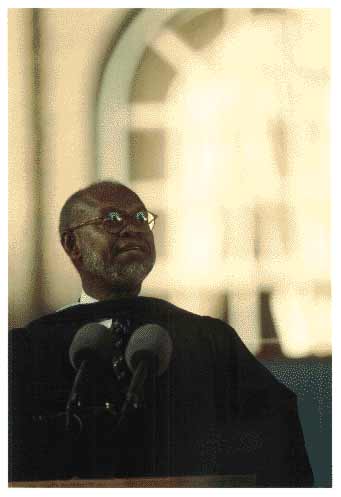 Director of Africa Research and Programs at the Center for International Development and former Finance Minister of the Republic of Ghana. Professor Sachs and Dr. Botchwey have been instrumental in arranging this visit of Nelson Mandela, and both have leading roles in the new “Emerging Africa” research initiative launched at Harvard in 1998.

The event we are witnessing here today has an historical significance which no words can adequately convey. Let me therefore begin on a note of inescapable understatement by saying how privileged I feel, and how very proud I am to be a part of it.

Africa’s image in the eyes of the world has for long been one of widespread poverty and political upheaval. The popular sentiment about the continent’s prospects is laden with much cynicism and deprecation. To be sure, this is not entirely without foundation. True, the conventional indicators of African economic performance have not been encouraging. The 1960’s saw economic growth barely keeping up with population growth. Per capita income actually fell in the 1980’s, and already by the mid-nineties, there was talk of a faltering economic reform effort amid fears that it was bound to be imperiled by the onset of political and constitutional reforms. Your genius in managing a successful democratic transition in South Africa gave the lie to these apprehensions and will surely go down as one of this century’s most enduring legacies.

Today’s historic event is taking place in a slightly different, even if confusing environment; one marked, on the one hand by a downturn in Asia’s economic performance, with consequent distress in international capital markets and, on the other, by an unmistakable, even if tentative, upturn in the economies of many African countries.

Now, this is by no means to suggest that the African crisis is over. On the contrary, as the published human development indicators amply demonstrate, the challenge of African development is as daunting as ever. For one thing, the higher growth rates that a handful of countries have begun to record are still rather fragile, resting as they do on rather low levels of domestic savings and investment. And yet, even for the strong performers, even for the countries that are doing well, the prospects of enhanced international cooperation are uncertain and, alas, the task of attracting private foreign capital will become even more difficult now thanks to the contagion effect of the emerging capital markets plunge. What is more, the accompanying collapse of commodity prices is bound to put added pressure on national resources. But in the end Africa’s fate will be determined by what Africa itself does. It will be determined by the quality and consistency of domestic policy reform and by the application of new knowledge to Africa’s long-standing problems. What the recent upturn in African economic performance shows is that the problems of the region are not the work of some inexorable iron laws that condemn the African people to an apocalyptic fate. It shows that in Africa, as elsewhere, things can be changed through conscious action. What is required, what the times call for, is a rigorous rethinking of development theory and strategy to guide this action, for, despite the pretensions of the prevailing orthodoxies, the evidence suggests that we do not have all the answers.

There is a quiet revolution in development research in Africa, much of it spearheaded by policy research institutes and programs sponsored by the African Capacity Building Foundation based in Harare. I and my colleagues in the new Emerging Africa project at the Center for International Development, and the larger African studies community at Harvard aim to contribute to this search for answers. Our project is a bold new initiative that aims to provide, in close collaboration with African researchers and institutions (including, we hope, the University of Cape Town), a multi-disciplinary development focus to the rich store of Africa related research and scholarship already underway at Harvard. The prospect of your visit has provided a powerful stimulus for this collaboration, and I have no doubt that today’s event will continue to inspire us in the years ahead.

Permit me to say that, for my part, I remain, like you, deeply optimistic about the continent’s future. For, yes, I see a continent in crisis. But behind all the turbulence, behind all the travail, I see a noble and indefatigable African spirit, that spirit which, Mr. President, you represent so quintessentially.