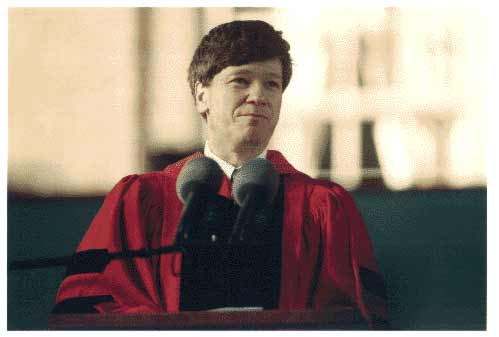 How glorious to be together today, to celebrate the achievements of great leadership, and to dedicate ourselves to the tasks that lie ahead. How glorious to have you, President Mandela, and your wife, Madame Machel, together with us, both of you champions in the struggle for human dignity.

We are here today, first and foremost, to honor you, to thank you, to savor your triumphs. You have noted that “freedom is indivisible.” By freeing your people you have helped to free people everywhere. But the quest for freedom, in South Africa, in the United States, in the world, is incomplete. We who gather here today wish to assure you that this university community recognizes the vital role it has to play in the ongoing quest for freedom.

On one other occasion during this century this University bestowed an honorary degree at an extraordinary ceremony such as this, to another great freedom fighter, Winston Churchill. Prime Minister Churchill, together with President Franklin Roosevelt, declared in the Atlantic Charter that theirs was a struggle so that “all the men in all the lands may live out their lives in freedom from fear and want.” Today we treasure your victories in extending the freedom from fear. We also commit ourselves, Mr. President, to struggling with you so that people everywhere may also win the freedom from want.

Harvard’s John F. Kennedy School of Government and the Harvard Institute for International Development are launching a new Center for International Development, dedicated to improving the economic well-being and health of peoples in all parts of the world. Our commitment to Africa is unwavering, as my colleague Kwesi Botchwey will soon describe. We know that extreme deprivation robs millions of Africans of their health and their livelihoods, even their chance to draw strength from the new political freedoms that they enjoy as a result of your labors. We believe, Mr. President, that intensive study and collaboration by scholars here and in Africa can help to roll back the scourge of poverty and economic isolation which afflict so much of Africa, and so much of the world. Our new Institute is therefore mobilizing major efforts in disease control, agricultural productivity, environmental management, economic policy, information technologies, and other areas, so that the best of our learning is applied to the most urgent of the world’s problems.

The world is unequal in material conditions as never before in history. Sixteen percent of the world, in the high-income countries, enjoy an average income of $25,000 per person. Eighty-four percent of humanity struggle for survival with market incomes averaging $1,100 per person. One and a half billion people live on less than $365 per year, or one dollar per day. And the gulf is widening.

It is sometimes glibly said that the poor have only themselves to blame, that poverty is the result of idleness, corruption, and the like. Our research teaches otherwise. Africa’s poor—the world’s poor—suffer mightily from scourges of disease, environmental vulnerability and degradation, climatic stresses, and other complex and poorly understood burdens, These burdens can be overcome, but that will require our best science, our best technologies, our strongest global collaboration, to overcome. That is the spirit which moves our efforts at the new Center for International Development.

To my colleagues in this community, I look forward to our shared work together in the quest for a world of dignity and prosperity. I thank you, Mr. President, with all of my heart for your magnificent deeds, and for honoring us by your presence here today.