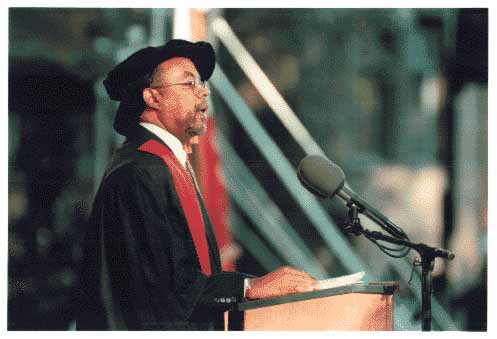 Like so many of my fellow faculty members, I attended university in the late sixties and early seventies. Ours was a generation that came to believe that the goal of a liberal education was “to be a tributary to society, not a sanctuary from it,” as Bartlett Giamatti once put it. For us, a liberal education meant the inextricable connection between life and letters, between the life of the mind and life as lived, whether in the ghettoes of America or in the townships of South Africa.

No one epitomized this commitment more for our generation, Mr. Mandela, than you did. Among competing anti-war and anti-racist slogans and images, the “Free Mandela!” poster was certainly the most ubiquitous. We could all agree, if we could agree on little else, that apartheid, and your imprisonment on Robben Island, were the epitome of evil and injustice. And we believed we were fighting for your release just as surely as we were fighting against the war in Viet Nam and against racial segregation at home in America. A “Free Mandela” poster graced the walls of my room during my college years, and when our first daughter was born, I was proud to hang that “Free Mandela” poster on the walls of her nursery.

Anti-apartheid activism among African Americans, of course, has had a long and noble history, commencing at the turn-of-the-century with the missionary efforts of the A.M.E. Church and extending to Dr. King’s oft repeated reminder that “the American Negro can never be free until his brothers and sisters in South Africa are free.”

The freedom of black South Africans was a leitmotiv in the work of W.E.B. Du Bois. Du Bois called apartheid “a medieval slave-ridden oligarchy,” and in 1950 he predicted with great foresight that before the year 2,000, the black majority in South Africa “will take over this wretched and reactionary section of the world and make it into a new democratic state.” Predictably, his statement was banned in South Africa. Had he been alive, Mr. President, Dr. Du Bois would no doubt have joined the thousands of African Americans who protested before the South African Embassy in Washington and submitted to arrest in the name of your freedom and in the name of freedom of all South Africans.

On the morning that you were released, Mr. Mandela, my wife and I woke our daughters early, just to watch you walk out of prison. When you finally emerged, we were so excited and teary-eyed at your nobility, your princeliness, your straight back, your unbowed head! I felt that there walked the Negro, as my father might have said; there walked the whole of the African people, as regal as any king.

As my wife and I accompanied our daughters back to their bedroom, I happened to glance at your poster, a poster now twenty years old. That poster is wrong, I thought to myself. Not only is Mandela free, but Mandela has always been free.

The Du Bois Institute plans to launch a program that will enable South African scholars to spend sabbaticals at Harvard, during which they will be able to work with our faculty and students exploring solutions to the problems facing their society’s transition to a multiracial democracy. We hope, with your permission sir, to call this group of scholars the Nelson Mandela Fellows, in honor of your triumph of the will and your commitment to justice.

Meanwhile, here in America, we know all too well the dangers of a self-perpetuating racial enmity in which grievance begets grievance in an unending cycle. Mr. Mandela, your own words speak as eloquently as your acts have done. You have been—in both words and deeds—a beacon of temperance and humanism. “During my lifetime,” you once said, “I have dedicated myself to this struggle of the African people. I have fought against white domination, and I have fought against black domination. I have cherished the ideal of a democratic and free society in which all persons live in harmony and with equal opportunities. It is an ideal which I hope to live for and achieve. But if needs be,” you concluded, “it is an ideal for which I am prepared to die.”

Thank God, sir, that you refused to die, and that you refused to allow an evil regime to kill your commitment to democracy and economic justice. Mr. Mandela, in the words of our people, you kept the faith, you made a way out of no way, and your sacrifice has ennobled the whole of the human community. You honor us with your presence here at Harvard today.