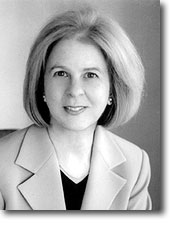 Elaine Pagels is a preeminent figure in the theological community whose impressive scholarship has earned her international respect. The Harrington Spear Paine Professor of Religion at Princeton University, Pagels was awarded the Rockefeller, Guggenheim and MacArthur Fellowships in three consecutive years.

As a young researcher at Barnard College, she changed forever the historical landscape of the Christian religion by exploding the myth of the early Christian Church as a unified movement.

Her findings were published in the bestselling book, The Gnostic Gospels, an analysis of 52 early Christian manuscripts that were unearthed in Egypt. Known collectively as the Nag Hammadi Library, the manuscripts show the pluralistic nature of the early church and the role of women in the developing Christian movement. As the early church moved toward becoming an orthodox body with a canon, rites and clergy, the Nag Hammadi manuscripts were suppressed and deemed heretical.

In her most recent New York Times bestseller, Beyond Belief: The Secret Gospel of Thomas, Pagels focuses on religious claims to possessing the ultimate “truth.” She contends that, as Christianity became increasingly institutionalized, it became more politicized and less pluralistic. Says Pagels, “I’m advocating, on some level, the inclusion of [religious texts] that were considered blasphemous. I suggest that there are ways of embracing a far wider spectrum of religious diversity within Christianity and quite beyond Christianity.”