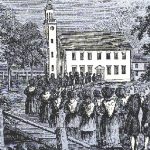 Americans have forgotten Fast Day, although it once was as important a holiday as Thanksgiving. In fact, it was paired with Thanksgiving and considered its necessary complement.

Thanksgiving and Fast Day originated together in colonial New England. Most Americans think Thanksgiving celebrations started in 1621, when Pilgrim settlers and Wampanoag Indians feasted at Plymouth. Yet the settlers themselves did not consider this event a day of thanksgiving at all, but simply a harvest festival. For them, a thanksgiving day involved a church service to offer prayers of gratitude to God for granting some great boon.

Similarly, when disaster struck, whether natural or military, the settlers assumed God was chastising them for their wickedness and so would show penitence by fasting and holding a church service to pray for forgiveness. A fast day, in other words, was a little like a Reformed Protestant version of Yom Kippur. Yet unlike Yom Kippur, fast days and thanksgivings had no regular place on the liturgical calendar. Over the first century or so of New England history, towns and colonies observed days of fasting and thanksgiving often, but only in response to specific events.

Around 1740, however, the New England colonies (except for Rhode Island, which always went its own way) began observing regular annual fasts and thanksgivings, corresponding to the local agricultural year. Fast Day was held typically in April; farmers were in effect asking for God’s forgiveness and blessing before they planted. Thanksgiving was held in November, to show God gratitude for the harvest. Only at this time did Thanksgiving come to be associated with a feast.

During the American Revolution and in the early years of the Republic, Congress or the President, in response to important events, proclaimed days of national fasting or thanksgiving, and both Fast Day and Thanksgiving looked as if they might go together on the national calendar. Eventually, however, Thanksgiving observance spread everywhere, while Fast Day observance died out, even in New England.

President Abraham Lincoln established Thanksgiving as a national November holiday by issuing two successive thanksgiving proclamations (1863, 1864), while the last national day of fasting was called in response to his assassination (1865). After 1894, Fast Day was no longer a legal holiday in Massachusetts. It hung on as a quaint anachronism in New Hampshire until 1991, when it was dropped to make room for the state observance of Civil Rights Day.

Fast Day failed, in part, because nineteenth-century Americans seemed to have had difficulty uncoupling it from the increasingly unpopular Puritan vision of God as a stern judge. They found they could more easily do so for Thanksgiving; it had always celebrated divine benevolence and could be observed as a secular feast. Moreover, Thanksgiving was a day on which to express gratitude for national blessings. The line between expressing national gratitude and expressing national pride, always faint, was eventually erased, allowing Thanksgiving to become a quieter, autumnal version of the Fourth of July.

Only as the holiday grew secular and nationalistic did Americans begin to associate it with the tale of the Pilgrim-Wampanoag celebration. On Fast Day, by contrast, a day set aside for the hard spiritual work of repentance for national sins, white Americans might have to consider their forebears’ complicity in the Trail of Tears.

Fast Day contrasts sharply even with its closest contemporary analogue, the National Day of Prayer, established by Congress in 1952 and championed especially by Protestant evangelicals. A few writers have pointed to Fast Day as its antecedent, but the two observances are actually quite different. The National Day of Prayer is a hollowed-out version of Fast Day, with the central component, repentance for national sins, taken out.

Although I would not want Fast Day again to be a public holiday (which would violate, in my view, separation of church and state), I wish a version of it could be revived. I see no necessary connection between Fast Day and Puritan theology, and a modern Fast Day might not even involve abstention from food. It would be a special occasion on which we break from our routines and join with our religious communities to reflect on our personal and collective wrongdoing, and make or renew our commitment to turn individually and together towards truth, justice, and love.

Meanwhile, on Thanksgiving, as we express gratitude for our blessings, we would do well to remember a spiritual truth that those old New Englanders knew: gratitude and repentance are paired, and the deepest gratitude often follows repentance.

By Dean Grodzins, Historian and HSL Board Member